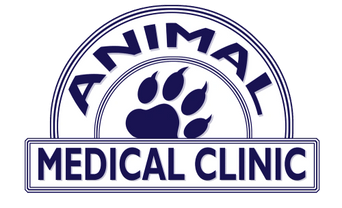 Dr. Woloshyn has been a Spring Hill resident since 1985 when he graduated from Washington State University and opened Animal Medical Clinic. Moving from the original small clinic in 1993 to the present location allowed him to expand the capabilities to serve his patients, and grow into the full service clinic it is today.

He and his wife Kathy, along with their three dogs, enjoy cooking (and eating!) and traveling the country, especially the mountains of the west.

Dr. Kaduk was born and raised on the west side of Michigan. She attended Michigan State University where she received a bachelor’s degree in Zoology and also her D.V.M. degree. She moved to Florida in 2004 to escape the long winters and experience more sunshine! Dr. Kaduk has worked at Animal Medical Clinic since January 2006.  in addition to their five cats, she and her husband Chris welcomed daughters Emmerey in February 2015, and Palmer in December 2016.  Dr. Kaduk is particularly fond of yellow Labrador retrievers as well.  She enjoys helping owners make the best decisions for their pets, from preventive care to chronic illness to end of life issues.

Dr. Doenges was born in Fayetteville, North Carolina and raised around the world as a daughter of one of our nation’s military service members. She received a Bachelor of Science in Animal Science from Berry College in Rome, Georgia; a Master of Arts in Human Relations from the University of Oklahoma in 2014; and her DVM in 2018 from the University of Minnesota. She moved to Florida in 2018 to escape the cold snowy winters of the north and soak up the sun. Her professional passions include working with dogs, cats and the occasional exotics/wildlife; with interests ranging from dentistry to preventative care to treatment of chronic illnesses and hospice care.  She enjoys reading, horseback riding, paddle boarding, and hiking and is looking forward to adopting a dog to share in her adventures.

Dr. Rodgers was born in South Carolina then, raised in south Florida. She started in dog sports at the age of 11 in agility with a Pembroke Welsh Corgi. After a few years, she started to show in conformation with Collies, Smooth Fox Terriers and her Corgis. She graduated with her BS from Stetson University in 2008, and then achieved a Master’s of Science from University of Florida in 2010. After her time at University of Florida she went to Mississippi State University for Veterinary school in Starkville, MS.  Once becoming a veterinarian, in 2014 she practiced in Tupelo, Ms for a little over a year then moved to central Florida in 2016 to be closer to family and back to her home state where she practiced in Lakeland for almost 4 years before coming to Animal Medical Clinic in 2019. Her professional interests include Reproduction (Theriogenology) in dogs, behavior and nutrition. She completed her Fear Free certification in 2018 to improve patient care.   In her spare time, she and her husband Jesse compete in conformation with their home bred Nova Scotia Duck Tolling Retrievers. Amazingly, the 3 cats allowed them to add a Boston Terrier named Leilawala and an Ibizan Hound named Turtle to the house. If Susan and Jesse aren’t at a dog show they may be at a Lightning game, playing street hockey, or out enjoying the local restaurants and breweries that Tampa bay is known for.

Anna was born in Illinois, (GO BEARS!) and is a die-hard Chicago Bears’ Fan. She graduated from Parkland College with a degree in Veterinary Technology in 1992. She moved to Florida in 1996, and also became an employee of the Animal Medical Clinic the same year. Since the start of her employment at the Animal Medical Clinic she has become a wonderful loving mother to many pets that have come through the clinic needing a home. At this current point in time she is sharing her home with three mixed breed puppies of various ages and sizes.

Colleen grew up in Penfield, New York and started grooming in 1979. She has been with the Animal Medical Clinic for over 20 years. She has shown dogs in obedience and conformation. Over the years, she has rescued many animals, five of which live with her presently. She enjoys being near the water and live music.

Jennifer Hind was born in Ontario, Canada. She moved to Florida at the age of five. She began working at the Animal Medical Clinic as a Front Office receptionist in June of 2003, and is now the Front Office Supervisor.  She is also the AMC computer wiz, Care Credit specialist, and is extremely knowledgeable on veterinary prescription diets, handling all the Hill's products.  Jen is the proud owner of a golden retriever named Hurley, a beagle named Roxy, a chihuahua named Theodore, two fantastic felines and a hedgehog named Dexter.

Emily was born and raised in Cape May County, New Jersey, where she worked at a veterinary clinic and volunteered at an animal rescue. She moved to Florida in 2013 where she joined AMC staff as a receptionist in the Front Office. However, now she works in the Back Office and has decided to go back to school to advance in the veterinary field.  She has three dogs, two horses, and Rosie the Bearded Dragon and her free time is filled with her animals and volunteering at a local horse rescue.

Amanda is a Florida native! She joined AMC in November of 2013 as a veterinary technician assistant and is one of the nicest, sweetest young ladies you ever want to meet. Amanda graduated high school with her certificate in veterinary assisting through Marchman Technical Education Center in 2012, worked as a kennel assistant and now wants to pursue her love for animals by being more hands on and involved in the every day care and treatment of our patients. Her spare time is spent mostly with family and her three furry children: Delilah, Bootsy, and Sketchers.

Elona was raised on a cattle ranch in Odessa, Florida. Her parents relocated to Spring Hill in  the early 2000's. Elona graduated from Springstead High School in 2013.  She began working for Animal Medical Clinic January of 2017.  She is an animal lover. She currently has two dogs, Gracie and Bella, as well as two cats, Sadie and Dixie.  We are pleased to have her as part of our team at the Animal Medical Clinic as a Veterinary Assistant.  She is currently pursuing a degree in Veterinary Technology to become a Certified Veterinary Technician..

Cathy was born and raised near Chicago, Illinois and has also lived in Texas and Minnesota.  In 1998, while in Minnesota, Cathy began working in the veterinary field as a receptionist and veterinary assistant.  She attended the Veterinary Technology program at Argosy University in Eagan, Minnesota and passed her national and state boards in 2004.  Cathy has always had a special connection with animals and loves being a Certified Veterinary technician.  She joined the AMC team in 2017.  Her spare time is spent with her two dogs (Beau and Liberty) and her two cats (Serene and Max).

Ashley was born in St. Petersburg and moved to Brooksville in 2010.  She was a member of FFA at Hernando High School where she raised swine to show at the county fair.  In 2015, she became a Certified Veterinary Assistant through FFA.  Ashley was a member of the National Honor Society and graduated with Highest Honors in 2016.  She also began working with a local dog rescue where she adopted six of her eight dogs.  Her and her eight dogs are accompanied by a dozen cows, three parakeets and a rabbit on her family’s farm.  In her spare time she assists a Certified Dog Trainer with dog training classes, volunteers at several FFA events as an Alumni member, and spends time with her family.

Heather was born in Gainesville, Ga. She has lived in many places including SC and VA. In VA she met and married her husband Mike. After her husband finished his military service in 2008 they moved to FL. In 2009 she graduated from St. Petersburg College with her Certified Veterinary Technician Degree. Heather has previously worked at the SPCA  in Largo. She enjoys dealing with animal welfare and will always put the animal first. Outside of work She enjoys family time with her husband, two daughters, Gator a yellow lab, Trike a rescue puppy, and her three cats Samantha, Emma, and Dexter.

Brenda is a Brooksville native. She graduated from Hernando High, Withlacoochee Vo tech (Law Enforcement program), and ATA Career College of Nursing. She has two daughters and nine grandchildren. Brenda has worked in the veterinary business for  16 years and absolutely loves what she does. She has three dogs that are her fur babies; Mesha, Autumn, and Summer. She also has goats and chickens. In her free time she loves to go camping, swimming, listen to music, and spending time with family and friends.

Sarah was born in Des Moines, Iowa and raised in Kansas City, Missouri. She graduated from the University of Missouri in May 2011 with a Bachelors in Health Science. She started her first job in the veterinary industry in December 2011 as a veterinary assistant. In August 2013 she enrolled in a veterinary technology program to further her education. In May 2015 she graduated from her program and passed her boards exams to earn her title of Certified Veterinary Technician (CVT). In May 2019 she married her husband Drew. In June 2019 they made the move to Spring Hill, Florida for Drew’s surgical residency program. Sarah joined us in September 2019. She enjoys working with all types of animals but cats are her passion. You could call her a “crazy cat lady” or “cat whisperer”. Outside of work she enjoys spending time with her husband & their three cats Lorenzo, Sulley & Ronan. They look forward to adding a dog to the family in the near future. She also enjoys reading, crafting, spending time at the beach and kayaking.

Sarah was born in Des Moines, Iowa and raised in Kansas City, Missouri. She graduated from the University of Missouri in May 2011 with a Bachelors in Health Science. She started her first job in the veterinary industry in December 2011 as a veterinary assistant. In August 2013 she enrolled in a veterinary technology program to further her education. In May 2015 she graduated from her program and passed her boards exams to earn her title of Certified Veterinary Technician (CVT). In May 2019 she married her husband Drew. In June 2019 they made the move to Spring Hill, Florida for Drew’s surgical residency program. Sarah joined us in September 2019. She enjoys working with all types of animals but cats are her passion. You could call her a “crazy cat lady” or “cat whisperer”. Outside of work she enjoys spending time with her husband & their three cats Lorenzo, Sulley & Ronan. They look forward to adding a dog to the family in the near future. She also enjoys reading, crafting, spending time at the beach and kayaking.

Fernanda was born in Philadelphia, PA and moved to Florida in 2003. Her love of working with animals began at a pet resort and dog day care. Through the years she has worked as a veterinary assistant and receptionist caring for animals. When she is not at work you can find her enjoying her time at the beach or home snuggling with her two cats Milo and Dexter.